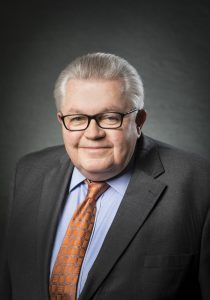 Dayton, OH — September 5, 2018 — In a message to employees, Willis O. Serr II announced that he will retire as President and Chief Executive Officer of Graceworks Lutheran Services on March 1, 2019. Serr has dedicated over 30 years of his professional career to the non-profit, faith-based, social services organization. Twenty-three of those years have been in the position of CEO.

In reflecting on the timing of his retirement and his contributions to the organization, Serr wrote, “Graceworks has played a central and meaningful role in my life … but now is the right time for me to phase into new roles and relationships. I believe that the most significant work that has been accomplished under my leadership has been the clearer definition and infusion of Mission, Values, and Vision into the organizational culture of Graceworks.”

Leading the way to growth

Graceworks Board President, Jeffrey R. Teeters, expressed gratitude for Serr’s strong financial stewardship and dedication to upholding the organization’s values and culture of Faithful Caring. “As a non-profit organization, it’s critical that we demonstrate competent and responsible fiscal management,” Teeters said. “Bill has always stayed focused on ensuring the organization provided the highest quality care and compassion for our residents and clients. At the same time, he has put us in a financial position that will serve us well for years to come.”

Since Serr took over as Executive Director in 1995 and later CEO, the number of Graceworks employees has grown from 706 to 1,171. Total assets have grown from $63 million to $169 million and operating revenue has almost tripled. The organization’s multiple service lines have each experienced their own growth under Serr’s leadership.

Graceworks Housing Services provides housing and service coordination for low income, elderly or disabled residents in 18 communities in Ohio, Indiana and Kentucky. Fifteen of the communities have celebrated 25 years of providing safe, affordable housing to residents.

In the past ten years, Serr has provided the leadership needed to complete over $60 million of expansion at Bethany Village retirement community in Centerville, Ohio. One of Serr’s last official responsibilities will be to dedicate the new Crescent Crossing assisted living suites at Bethany, set to open in early 2019, and a new expansion to the Village Fitness Center.

In his announcement, Serr credited the employees of Graceworks for their commitment and dedication to the organization he has served so faithfully. “It has been an honor to work with all of you over these many years. Your dedication, commitment, and excellence has always inspired me and made my job easier. I feel that I am one of the luckiest men alive to have had the opportunity to lead Graceworks Lutheran Services with such a talented and compassionate staff standing beside me.”

In addition to leading Graceworks, Serr has served the local Centerville community as a City Council member since early 2016 and is an active member of Dayton Rotary, two activities he will continue in retirement.