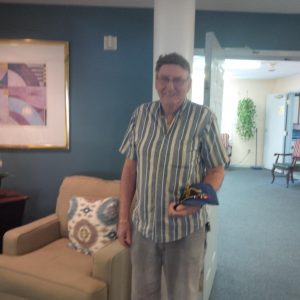 Vance Pribble, veteran, gets ready for the Honor Flight.

“Whatever needs done, I do it,” says Vance Pribble, a resident of St. Mark’s in Milford, Ohio, a Graceworks Housing Services community.

Vance spends his days helping other residents that call St. Mark’s home. He drives them to appointments, fetches groceries and weeds flower beds. He even helped the community’s maintenance man keep up on work when the building needed repainted.

“When the halls were being painted, I put all the garbage out, run the sweeper and mopped the floors so the maintenance man could get the painting done,” explains Vance.

In addition to his current volunteer service to his neighbors, Vance is also a proud veteran of the U.S. Army, the 1st Infantry Division (also known as the Big Red One) and Purple Heart recipient. He was in the service for eight years, and took his basic training at Ft. Bliss, Texas.

It was during that basic training where Vance earned the Purple Heart. A fellow soldier was talking during ranks, which angered the Major in charge. The presiding officer told the man to do 50 push-ups as punishment. The soldier handed Vance his gun, which was loaded at the time. When his push-ups were completed, the soldier jumped up, grabbed the gun and attempted to shoot the Major in the back.

“I grabbed the gun, it went off, and it hit me just above my left eye,” explains Vance of his quick thinking. “And I spent four days in the hospital. I still have the scar. The Major was so thankful that I saved his life that he gave me the Purple Heart. This story was even published in [military newspaper] Stars and Stripes.”

In addition to the Purple Heart, he also earned the National Defense Service Medal and the Occupation Medal – Germany for his work in the Army. In 2008, Vance was granted his diploma from Milford High School — 58 years late. His education was interrupted by the call to serve.

Vance left the military in 1960. While he was in the service, he held many jobs, including one driving a truck. This proved helpful for his life after military service as he became an over-the-road semi driver for 20 years. Later he trained in major appliance repair and worked in that industry for more than two decades. Now at age 82, Vance is ready for his next adventure, which is a trip on the Honor Flight in May. Vance will attend with several other veterans from the Cincinnati area and travel to Washington, D.C. to view various war monuments. The veterans enjoy a large “welcome home” ceremony upon return to the Cincinnati airport.