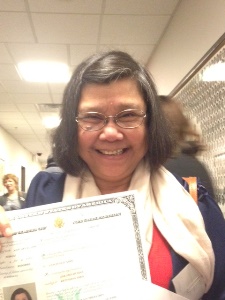 Delores Bundoc, a nurse with Graceworks at Home for more than two years, recently became a United States citizen.

Delores was born in the Philippines.  She moved for a short time to the United States in 1972. Got married in 1973 and had her daughter in 1974 in the United States.   Her family then moved to Australia in 1977 for 15 years.  She returned to the United Stated in 1991 with a green card. She’s lived in America over 20 years and always considered it “home.”

One day, upon returning back the United States from a trip to the Philippines, Delores had to stand into a different customs line at the airport than her daughter and her daughter’s family to reenter the country.  Her grandson, who was three years old, was upset and cried that Delores wasn’t with him.  This was the catalyst to Delores’ path to citizenship.  In time, she completed and submitted the twenty-two page citizen application. Her application was accepted and she was sworn in as a citizen this past December.

“Delores has compassion for her patients and goes above and beyond client expectations.  Delores quickly becomes a favorite by the client and family members,” states Bonnie Smith, Graceworks at Home Administrator.  “Delores is gentle and very caring, she give outstanding care to each client. Delores is so proud to live in the United States and has been a model citizen for many years. I am so proud of her accomplishment in life and achieving her goal to become a United States citizen.”

To Delores becoming a citizen was important to her.  She says it is like becoming part of a larger family and being accepted instead of being the outsider looking in.  She wanted to be able to vote and have the right to potentially be on a jury.